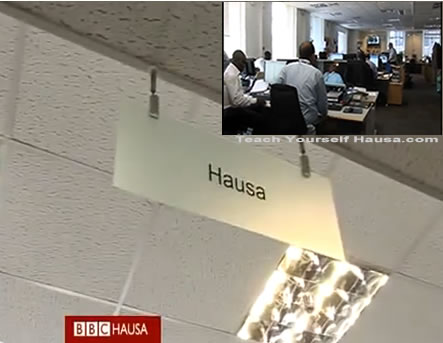 Ziyarci shafin (visit) wwww.BBC Hausa to get detailed reports on stories of the BBCHausa service in Nigeria, Niger and Ghana among both opinion and quality of the BBC Hausa Service in the eyes of local opinion formers and the wider audience.

The BBC World Service in conjunction with www.bbc hausa is responsibility for ensuring bbc news Service is delivers in accordance to BBC values and purposes.

The wwww.bbc hausa Service was chosen as it reaches the largest audience of all World Service radio services. Hausa is the most biggest language in Africa.

It is therefore an important audience for the BBC world service Trust to understand in its role of evaluating the performance of the BBC World Service.

Do you know that Hausa broadcast on BBC since 13th March 1957 and Hausa language is the only west African Language ever broadcast on world major Radio news stations such as:-


The Quality of the BBC Hausa Service

www.Bbc Hausa speakers are mostly Muslim although some are Christian. In Nigeria, the audience groups were mainly Muslim in Kano whilst some Christians and other non-Muslims were in Kaduna.

The majority were Muslim although some Christians were in the federal capital territory Abuja. All audience in Ghana and Niger were Muslim.

In Nigeria, in both urban and rural locations within these states Abuja, Kano and Kaduna you will find the audience which was focussed on the northern states of Kaduna and Kano as the audience is predominantly in the North.

In Ghana, in Accra; in Niger it was in Niamey were mostly the Hausa speakers.

Radio is the cheapest and only always reliable means source for listeners to confirm stories.

Here are the Top Ten Sources of News (Nigeria)


In Nigeria, Hausa language speaking audiences are far less likely to watch television or use the Internet than are other Nigerians.

While the most common way of going online is at Internet cafes, mobile phones represent the most prevalent means of personal access. Social networking sites such as Facebook are increasingly popular as a source of news and information.

The media landscapes in the north and south of Nigeria differ dramatically.

Media in the north continues to revolve around radio; access to and use of shortwave radio has not changed significantly forseveral years.

Even among elites in capital cities in the north, television and Internet use are not prevalent. In the south, on the other hand, evening TV audiences have surpassed evening radio listening.

Nigeria continues to be a strong shortwave market, though this is almost entirely due to the habits of the BBCHausa population, as their daily use of shortwave radio is six times higher than that of other Nigerians.

The BBChausa Service offers live and recorded broadcasts as well as written content on its www.bbc hausa website, and at hausa.voa.mobi provides the latest news to mobile phone users. The service is on both Facebook and Twitter.

Hausa people are educated in Hausa languages, so that's why BBC choose Hausa in 1957 over 3000 African languages.

British choose Hausa because they knew Hausa language could be advanced than others. Yoruba and Igbo had enough speakers compared to Hausa.

When Frederick Lugard came to Hausa frontier in 1903, he didn't teach English to Hausa, but he was ordered to learn Hausa language instead. Northern Nigeria's Official language is Hausa.

Hausa are one of the Ancient Civilization in Africa, with Kano being over 900 years old.

The richest Black Africa on Earth is Hausa. www.bbcHausa was the only West African language on BBC. Hausa produced the first West African Terrorist, who can kick some ass.


Abubakar Shekau is the leader of the militant Islamist group Boko Haram, which has carried out a series of deadly attacks across northern Nigeria.

The leader of the militant Islamist group Boko Haram is said to be a fearless loner, a complex, paradoxical man - part intellectual, part gangster.

Popularly known as Imam or leader by his followers, Abubakar Muhammad Shekau was born in Shekau village in Nigeria's north-eastern state of Yobe.