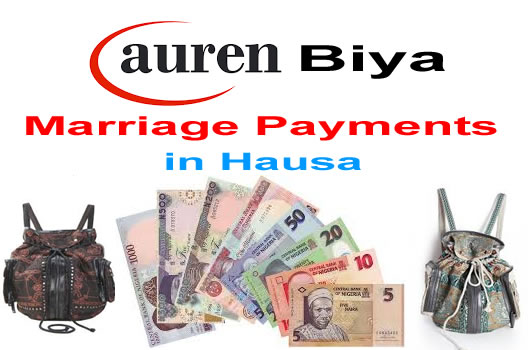 It must be stated that these are not neat marriage categories. For example, the auren zumunts (not aure kommune as seen in the aure dadi or aure atika films) also include preferred marriage in which spauses of certain occupational groups are involved.

Hausa girls marry normally at about 14 years, before which time, if betrothed, they received gifts in money (kudi in hausa), even as early as from six years.

The type of Hausa marriage (hausa traditional marriage) may also indicate the age of the bride.

For instance, auren baiko (marriage engagement) occurs normally between 13 to 14 years and is normally the first marriage, while auren tsintuwa hardly ever occurs as the first marriage of the woman or among the wealthy or top politicians, unless in an expensive way.

Of course where auren tsintuwa involves the marriage of prostitutes (or "lost property"), usually inexpensive, their ages must be advanced.

Auren mutsaya (Nigeria social structure or what makes Nigeria a social system) is the least prestigeous. This marriage of exchange involved the usual form of marriage which the master arranged for his slave or one arranged by unrelated immigrants.

Post-martial residence is normally virilocal among the Hausa except in the case of auren daukisandanka.

By Hausa tradition, girls marrying for the first time are required to be virgins for example those involved in auren baiwa (marriage grant) and auren gata (marriage privileges).

Otherwise the husband beats the bride, complain to her parents, and symbolizes the fact by hanging a broken calabash by their house.

A girl having pre-martial virginity got more respect and prestige. Ceremonies marking a man's or woman's first marriage are different from those involved in a second and subsequent marriages.

Also, there are differences in the time interval required before marriage payments are made and the bride escorted to her marital home.

This and other accounts of Hausa marriage refer to several stages accomplished before a marriage is contracted; betrithal, giving gifts and rendering services to the bride's parents;

Solicitation of parental agreement, marriage payment and its division amongst bride's paternal and maternal kinsmen, prayers and rituals on a wedding day and pre-wedding advice on the pending role of family members, are regular features of traditional Hausa marriage.

A man and a woman normally state and show their consent to be married.

But where a father arranged a marriage and one or the other partner refused to be married, even in marriage of almsgiving (the practice of giving money or food to poor people) (auren tsintuwa), he or she may be persuaded by the parents and other elders to do so.

A girl on escort to her marital home is given grain, cakes made from beans, locust and groundnuts, salt, oil, rice and some utensils by her parents and well-wishers.

Hausa marriage payments vary from nothing, as in the case of auren sadaka, to about £200 paid in case of marriages made by wealthy people.

Hausa marriage expenses include gifts of money and cloth to the bride particularly at festivals, gifts to the girls maternal as well as paternal kinsmen, gifts to the brides parents and their kinsmen, and also the legal payment, Sadaki.

Auren sadaki is the only legally necessary cash gift required of a man under Islamic law to establish teh contract and status of marriage.

Also from rich families, gara includes wooden bed, mattress, pillow, table, stool, and box, all of which may totalabout £12, meant to compensate the marriage expensives by the bridegroom's family.

Where no marriage payments are made as in the case of auren sadaka, the mallam returns some token gifts of gratitude to the girl's family. Such gifts include salt, grain, rice, guinea corn, and implicate the man's consent to the marriage contract.

It is not in every case that a Hausa girl enters marriage voluntarily. For example, in auren sadaka, a bride may have no previous knowledge of the marriage.

Where a girl disliked the marriage, then she could cause suicide by jumping into a well, or she could run away and be 'lost' or she could seek divorce with her parents consent.

Marriage among the Hausa people thus follow the Maliki (not maliki iraq nor nouri al maliki) law by which marriage is required to be a contract between guardians (wali; not dili wali girlfriend nor video wali) of the partners.

Such marriage is celebrated in marriage feasts (bili, not bilibili) independently by the bride's and by the groom's families.

On these occasions,gifts received are distributed to both thenear and distant kinsmen of the bride or bridegroom as the case may be.

At whatever level of the family, the man has the authority over his wife or wives and children, and over his younger brothers and sisters.

Inlaw relations involve a deference, a mechanism by which order is maintained in the immediate and wider family circles.

A man respects his inlaws and elder siblings and provides the essentials to his wife or wives such as shelter, food, medicine, cloths, etc.

The wife visits her parents with his permission. The husband satisfies the wife or wives sexually but he is free to have sexual relations with other women who are not concubines.

Female friends and the wife's kinsmen may visit her with or without the husband's permission. On the other hand, a wife must obey and respect her husband. Wifes cook or sweep and do domestic work in rotation.

They obey the man's chief wife and their husband's parents, care for their babies whom they nevertheless surrender if and when divorced.

Wives are not expected to be adulterous; they are not to carry out any abortion. A husband and his wives may not eat together.

Men thus take charge of order in the house and engage in physical works and occupations such as inpot making, farming, weaving, carpentry, marketing, fishing and hunting. Women cook and engage in domestic duties.

These female and male duties indicate social interdependence even at the family level.