Nigerian Film Movies - Hausa movies? Looking backward and looking forwarding of the past, the video present and the digital future. 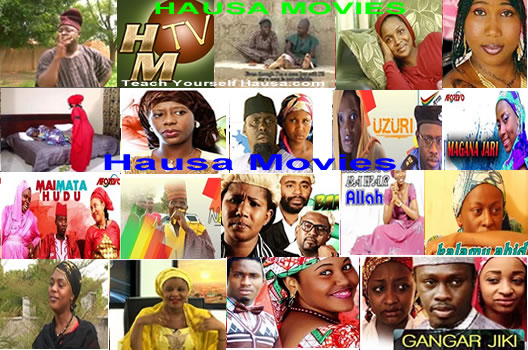 In hausa language, movie is called "Sinima" and a sinima is a film and "yar wasa" is a player/actor

It is better to move forward by looking back, through an interactive historical journey covering following obivious sub-themes:

But first, what do we understand by African cinema movies?

Theterm is generically employed to describe films movies produced in sub-Saharan Africa since the Nigeria independence in the 1960s.

There is a deep-seated biases and attitudes about skin colours of black skin movie cast.

Some filmmakers appear to be exploring a deep-seated bias within black culture against women with darker skin or dark girls.

Incredibly, even in the making of home video hausa movies industries of black African nations are already caught in the trend to glorify like skin and look down on black skin.

For example, virtually all the big stars of the present crop of Nigerian and Ghanaian movies are either mulattoes or very light skin blacks.

[According to WIKIPEDA, Mulatto is a term used to refer to a person who is born from one black parent and one white parent, or more broadly, a person of mixed white and black ancestry in any proportion.]

Many of the stars of even movies in local languages (for example, Igbo, Yoruba and Hausa movies in Nigeria) show the ravages of their battle to turn their skin light with bleaching creams by the highly visible network of stretch marks in many parts of their bodies.

People of Isreal ( or Yisreal) notes that "Films, Movies, Television TV and some white people portray the people of the Bible as white.

If I were white, I'd say no, and if this was an ideal world and if all affluent people looked like me.

But we are living in a world of lies and deception and when the children's mind develop off of the deception that is being told and taught, then the truth must be brought to the forefront."

Anti-black racism in sports and entertainment do appears in the abuse of players /actors /actress /presenters, officials /crews, fans /audience, and so on, because they are black.

While some may be targetedpartly also because of their association with an opposing team, there have been instances of black individuals being targeted by their own fans.

White hostilities to black sports men and women, and entertainers may be out of jealousy that these are areas, in which blacks appear undeniable superior.

For example, Adolf Hitler and his racist theorists did all they could toproject the idea that whites (Nordics or Aryans) are physically superior to blacks,

Adolf Hitler who was humiliated and visibly upset by Jesse Owens victories refused to shake hands with Owen.

When it comes to music, some whites have attempted to pass off their dull drab punk music and entertainment as more civilized and superior to black's energetic (barbaric?) entertainment,

But they have NOT been successful as even they have been unable to resist the lure of African rhythm.

In music, dancing and in the entertainment industry as a whole, where there are less fetters on advancement of blacks, the drift appear to be a preference for Afro Beats.

Ironically, even in area where "superiority" may be conceded to blacks (e.g. boxing, athletics 100m sprint etc...)

And many blacks have in fact embraced the reality that they can only excel and accrue wealth through sports and entertainment, we find seeds of further debasement of blacks.

You may be wondering what does all this got to do with Hausa movies? A very good question to ask indeed.

THE AFRICAN MOVIE REVOLUTION IS ON: Hausa Movies TV (or for short HMTV) is a television channel within Google's YouTube.com, where they are marketing and promoting a carefully selected Hausa classic movies.

HMTV uploads numerous Hausa movies 2019, 2020 & 2022, the best of Hausa cinema and entertainment for anybody viewing pleasure as you sit back at home, relax and enjoy.

Hausa Movies TV is in collaborative with HausaFilms.TV (and possibly Naijapals movies or Naijapals Nigerian movies) in promoting the culture and traditions of Nollywood's Hausa films.

Do you wants to learn Hausa Language?

It's a general knowledge that watching Hausa movies (or Hausa films) is a good and entertaining way to learn the Hausa language and also get insights into the way of life of the Hausa people.

The movies that HMTV uploads, usually some of the most educative, interesting and action packed Nigerian films you can watch with your families, friends and relatives with everybody smiling laughing joking around.