Every day VOA's Africa division broadcast for you international and regional news in English and eleven other languages, which includes hausa language.

VOA has correspondents in Abidjan, Cairo, Johannesburg, Nigeria hausa news and Nairobi, as well as a network of over one hundred journalism throughout the continent.

It has a clear signals and very easy to access when compare to BBC Hausa. It broadcasts on AM (Attitude Modulation).

For voa hausa service, check your local listings for times or look on VOA News website www.VOANews.com/TVToAfrica for stations in your area.

Voa news hausa or VOA programmes are also relayed on FM in Niamey, Maradi and Zinder through partnerships with Radio Tenere, Radio Anfani and Radio Sarraounia.

Much of the Hausa service programme content is produced at studios at Abuja and Kano in Nigeria. The VOA Hausa Service has been broadcasting continuously since 1979.

The voa hausa labarai or hausa voa first went on the air in 1942, is an international multimedia broadcasting service funded by the United States of American government through the Broadcasting Board of Governors.

Voice of America hausa (or voa hausa online) broadcasts to approximately 1500 hours of news, information, educational and cultural programming every week to an estimated worldwide audience of 125 million people.

There is a new expanded programming voa hausa radio includes five hours of morning broadcasting and six hours of evening broadcasting which can be heard throughout Africa on shortwave frequencies 15240 and 13710 kHz, and on 24/7

Hausa VOA listeners are generally seemed to accept that the broadcast was the point of view of America and that it helped them to build an all round understanding of issues. It's like voa are trying to sell America.

These half-hour news, information and entertainment programs include the following features:-


The Voahausa.com Muryar Amurka is the Jaddawalin Shirye-shirye. You can easily listen to daily VOAHausa broadcasts Shirin Hantsi/ Shirin Safe/ Shirin Dare/ Shirin Rana to keep in touch with what's happening in the world in Hausa people and hausa language.

The Voahausa service is one of the most reliable source of current Hausa news service. Below is the voa hausa service staff photos . 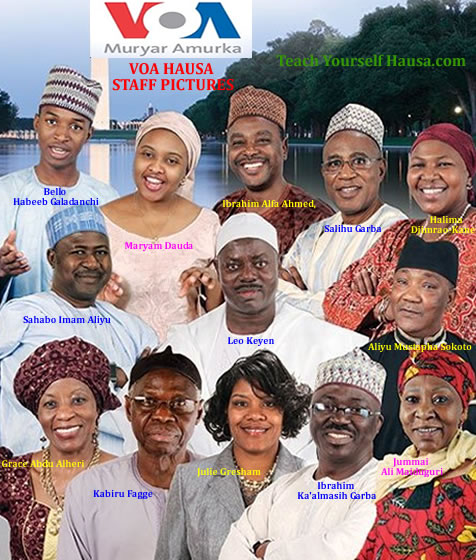